What's complicated is that each state has its own regulations with regard to foreign visitors and driving, so please consult with the state's Department of Motor Vehicles (DMV) before making your travel plans. Some states don't recognize international driving permits. IDP must be issued by your home country - not the United States. Your home country must be a party to the UN Convention on Road Traffic (Geneva, 1949) that allows residents of one country with a valid driver's license to drive a motor vehicle in another country who also participates in the Convention. 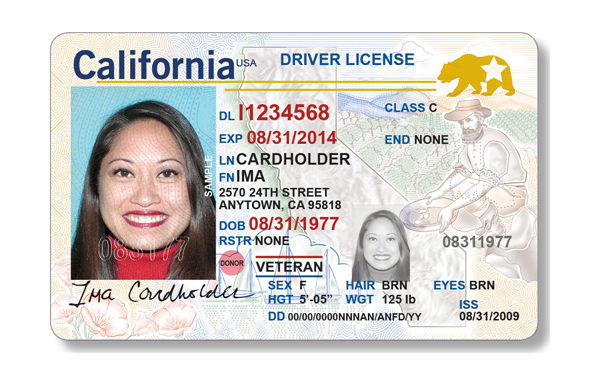 A Sample California Driver's License (not an international driving permit).

An IDP can not be used as a substitude for a valid, government-issued driver's license. It cannot be used as your identification card.

Note that China is not part of the UN convention and therefore does NOT issue international driving permits! However, Chinese visitors are allowed to drive in many states, including California and New York, with their own driver's licenses issued in China. An formal Chinese-to-English translation of the driver's license also helps.

Warning: if you have a U.S. driver's license, do NOT use your international driving permit as proof of your ID or license to drive. An IDP is NOT a replacement for your state-issued driver's license. Very important!

Also, be very careful with scam websites selling fake IDP's which can get you in serious trouble. For example, in the United States, only two organizations are authorized by the State Department to issue IDPs to U.S. citizens: American Automobile Association (AAA), or American Automobile Touring Alliance (AATA). And the cost is only $20 for any U.S. resident who needs an IDP to drive in a foreign country. If you're planning to visit the U.S. and you need an IDP, find out which organizations in your home country are allowed to issue them before buying one online.

Keep in mind that most states have restrictions on how long you may use an international driver's license, usually no more than a year. So once you become eligible, you are encouraged to apply for a driver's license with the Department of Motor Vehicles (DMV) of the state you reside in. Different states have different residency requirements, so check with your state's DMV for details.

A state-issued driver's license allows you to drive legally in all U.S. states. It is also proof of personal identification. However, as a non-immigrant visitor on temporary visas, you may be required to carry other types of ID or proof of your legal immigration status. Although most local authorities do not ask for immigration paperwork if you carry a valid driver's license, it is still a good idea to bring with you at least a copy of your most recent I-797, for example, just in case.

If you are driving with an international driver's license, however, you must carry a valid passport or other form of legal identification. As mentioned before, an IDP doesn't prove your ID.

Lastly, the U.S. has very strict laws on the use of seat belts and child safety seats, and they vary from state to state. It is important to understand the regulations of the state you plan to visit. For your own safety, though, always buckle up, use a child seat whenever possible, and obey the speed limit.

Have a safe trip!